Here's a splendid website devoted to topics relevant to TOK presented by the BBC in association with the Open University. Especially impressive are the pages devoted to Mathematics: More or Less. This title actually refers to a radio programme aired on BBC Radio 4 which you can also download from the BBC's i-player. Navigate through the menu bar on the left to access various articles on mathematical subjects.

On the Home page of the site (or on the 'Learning' tab at the top of each page), you'll be able to look at the OU's 'Browse' menu which is categorised in a way which looks very similar to the AOKs in TOK. Here are some direct links:

The articles on these pages will help you to develop and vary your use of key EXAMPLES in your essays and presentations and to ensure that you don't repeat clichés...
Posted by TOK Team at 8:25 AM No comments: 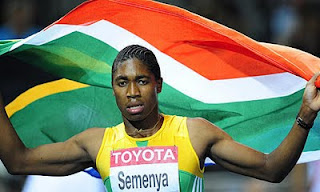 If you've been following the World Athletics Championships in Berlin, you'll be familiar with the controversy regarding the South African Women's 800 metres champion, Caster Semenya. There are allegations from her fellow athletes and others that the eighteen year old sportswoman is a man.
Here's an aptly entitled (and extremely interesting) blog article that discusses the subject: 'Man or Woman? The Importance of Knowing'. Compare this with a Guardian article on the aftermath of Semenya's Berlin victory.
The International Association of Athletes Federation (IAAF) suggests a possible solution to the problem: Semenya must undergo 'gender verification tests' to establish her true gender status. What do you think these tests involve? Apparently the tests take a week to complete and involve a group of scientific specialists. They may reveal that Semenya has both male and female genitalia which is not an uncommon state of affairs.
Both of the above-mentioned articles point to cases which suggest that these issues are not new. Reflect on the tragic case of David Reimer (article 1) and on the very different case of a female tennis player (article 2) and consider if we have learned to see through the media hype surrounding these cases and to deal with them sensitively.
The issue not only raises questions regarding what it is to be human, but also about the nature of human sexuality. How do we define 'masculinity' and 'femininity'? How do these differ from or relate to our understanding of what it is to be a 'man' or 'woman'? And do these definitions change with the advance of scientific knowledge about the human body? On a more psychological level, we must question the motives of human beings in their social interactions: how far are these motives driven by fear, jealousy and greed? How far is it true to say that those accusing Semenya of cheating are motivated by a 'racist agenda'?
Posted by TOK Team at 9:30 AM No comments: 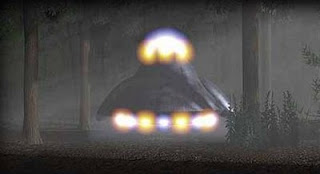 Is the truth out there?

Last October, the Government's MoD released its own 'X'Files' on UFO sightings in the UK since the late seventies. One refers to a case in 1980 which is being dubbed as Britain's 'Roswell' in Rendlesham Forest, Suffolk (click the above image). Another batch of files released this month has renewed interest in the UFOs and the central questions that are related to this phenomenon such as, are we alone in the universe? Is there a conspiracy relating to the use of alien technology? Are world governments covering up the fact that aliens have visited, or are indeed already inhabiting, the earth?
Read this article in the Guardian and have a look at the National Archives and MoD website for further information, especially if you decide to base a presentation around this topic or write about it in your essays.
You will need to consider the common assumptions that people make about UFOs and the assumptions we make about those who claim to have seen them. Consider the definitions and concepts used to discuss the subject: what do we mean by using the word 'UFO'? Consider then the problem of perception and common sense: can we relly believe all that we see? Consider also the various arguments and counter-arguments relating to the phenomenon: the physical evidence relating to the existence of aliens compared to the psychological evidence which suggests that humans are strongly affected by the power of suggestion.
While you delve into your researches, you might like to consider these question too:
1. What is the difference between 'good' and 'bad' science?
2. To what extent is the paranormal experience of seeing a UFO comparable to the mystical experience of seeing God?
Posted by TOK Team at 7:46 AM No comments:

For those of you working hard on your TOK Presentations (and those of you planning to begin your hard work!), here's a guide we found courtesy of Mr. R. Bruford, Dean of Studies at Prince Alfred College, Australia.

It will be useful for a numnber of reasons, but the two most important ones are as follows:

1. The guide gives you a number of possible topics to work on if you are still unsure about which subject to explore (pp. 4-5.)

2. The guide neatly clarifies the meaning of that important concept, KNOWLEDGE ISSUES, which should form the foundation of your presentation and essay (pp. 8-10.)

Keep working away and we look forward to seeing the fruits of your valiant labours in September...
Posted by TOK Team at 8:45 PM No comments: