The truth, the whole truth and nothing but the truth...

Having read so many TOK essays over the years, one common thread becomes apparent in students’ approaches to the issue of truth: confusion.

The word ‘truth’ often appears as part of a Prescribed Title or is implicit in a discussion of knowledge. Here, we’ll attempt to address the idea of truth and clarify how you could approach it in your TOK Essays and Presentations. The key concept you’ll have to get to grips with in this discussion is ‘evidence’ and how this can be used and abused in knowing truth.

Students tend to distinguish between two kinds of truth:

1. Absolute truth – aka. ‘universal truth’ which is somehow unchanging and always true regardless of what individuals might think or feel about it. An example often given is 2 + 2 = 4. Please avoid this clichéd example in your work; it is much too simplistic and doesn’t help to support an argument proposing the absolute nature of truth. Other examples provided are the so-called ‘truths’ of religion, such as the resurrection of Christ. If you ask a believer how he knows this truth, he might point to the evidence of the Bible. Now there are a few counter-claims you can make. We’ll consider two:

a. How can we trust the words of the Bible since they were written by so many different hands and often seem to contradict each other?

b. What about ‘truths’ believers are supposed to hold as absolute which do not appear in the Bible, such as the Assumption of Mary?

The first counter can be dealt with by arguing that we just have to have faith – that is, the evidence of the Bible is not ‘factual’ evidence that provides rational grounds for the belief, but that we must simply trust in the Word of God which was dictated to the writers of the Bible. The second counter follows a similar move: truths not based on Biblical ‘evidence’ are declared truths by an authority figure whose great wisdom in such matters guarantees or underwrites the nature of the truth and makes it absolute. This actually happened in the case of the Assumption of Mary.

Now these defences of Absolute truth are not entirely satisfying are they? They beg the question of how God actually goes about dictating truths to people? Moreover, why some people and not others? And what exactly goes on during this process of divine inspiration? These are not simply rhetorical questions. Theologians have attempted to answer them in a defence of religious belief, but we won't go into those answers here.

2. Relative truth – aka. ‘personal truth’ which depends on individual perspectives and is based largely on opinion. The usual move students make follows this routine:

a. We are all individual and experience the world in different ways so we only have a personal conception of truth.

b. Our sense of truth is limited by personal bias, our upbringing, our cultural or religious beliefs, our fundamental sexual and gender differences and so on.

c. We can never go beyond this personal sense of truth; it drives everything we think about, perceive, feel and do.

Again, the idea that we can all believe whatever we want to believe because it’s all just a matter of opinion isn’t very satisfactory. How can we possibly counter this relative view of truth? Surely, your opinion about oxtail soup is your truth and my opinion about it is my truth and we should just get on with life. This might work in the case of oxtail soup, but what about more important situations like your opinion about abortion. Now we could counter the relativist position by pointing out that some of the things we believe to be true might, like belief in religious ‘truths’, have no supporting evidence: for example, the belief that a red sky at night means the weather’s going to be nice tomorrow. This isn’t quite a faith position like the religious believer but it could be argued that it’s a superstitious position. We could also point out that there are so many truths that we actually agree upon because they have a rational and evidential basis: for example, it takes roughly 24 hours for the earth to spin on its axis.

Now this kind of factual truth leads onto a discussion of how to think about truth in a TOK context...
Posted by TOK Team at 2:22 PM No comments: 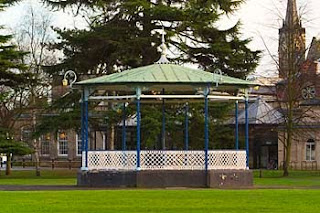 You may not know it but this is the one hundredth post of ibtokspot since we started posting in 2008 and to celebrate this century of blogs (and the fact that the Spring is finally making a breakthrough here in the UK), we're organising a grand Easter TOK Picnic.

Everyone is welcome and even though many of you who visit our site are based in the farthest reaches of the planet, I'm sure you'll be at the picnic in spirit!

So please bring a dish of something special to share; bring yourself and anyone else you care about to join in the day's revelry...oh yes, and a little bit of TOK discussion about the things that really matter.

We'll meet up with you in the Bandstand at the Pump Rooom Gardens in Leamington Spa at 12.00pm on Saturday 3rd April 2010.

There's no entrance fee and it's a great way of meeting up with people from different backgrounds who have one thing in common - a love for TOK!

Click the picture above to get a link to a map describing how to get there.

Look forward to seeing you there and please remember to bring something warm and perhaps even an umbrella - we're not going to allow a little bit of rain to stop us from tokking away!

PS. Put a comment on this post to let us know if you're coming, just so that we know who to greet...
Posted by TOK Team at 7:45 PM No comments: