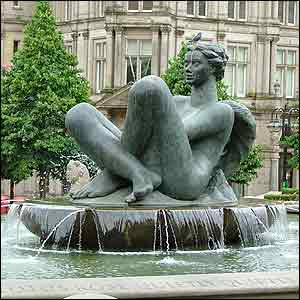 After the last TOK picnic during Easter weekend, which was washed out owing to the wet English weather, we hope to have another attempt!

Let's hope that the sunshine is out during the next Spring Bank Holiday weekend.

We hope to meet you this time in Birmingham's Victoria Square, just outside the Museum and Art Gallery, next to the statue (pictured above) called 'The River', at 12.00 pm. on Saturday 29th May 2010.

Around the rim of the pool is a quotation from 'Burnt Norton' one of the Four Quartets by T.S. Eliot:

We'll be sitting by the words 'the lotose rose' - you can just about see the words on the bottom left corner of the picture.

Everyone is welcome - please bring a dish of something special to share; bring yourself and anyone else you care about to join in the day's revelry...oh yes, and a little bit of TOK discussion about the things that really matter.

There's no entrance fee and it's a great way of meeting up with people from different backgrounds who have one thing in common - a love for TOK!

Click the picture above to get a link to a map describing how to get there.

As a mark of recognition, either tie a white handkerchief to your rucksack or bag or put a comment on this post to let us know if you're coming, just so that we know who to greet ...

We appeared at the last minute on 'The Big Questions' this morning at King Edward VI School, Handworth, Birmingham, which you can catch on the BBC i-player if you click the picture above - it should be available for a week, until the next program.

The three questions debated were:

1. Should mothers get special treatment at work?

2. Does England deserve its own Parliament?

3. Does the law undervalue Christian values?

Our contribution is on the second debate and can be summarised in the following statments (they might seem extremely general, but you don't get much time to express a point of view!)

As far as politics is concerned, we're battling against an extreme scepticism. Our position can be expressed as follows:

It is by no means self-evident that politicians - or Governments - have our best interests at heart (so whether we have an English, Scottish, Welsh, Irish or joint British Parliament is beside the point.)

There is a general tendency in the populace towards unthinking, unquestioning behaviour (people are so brainwashed bythe Media that voting becomes a matter of choosing personalities on superficial grounds much like in well-known reality TV shows.)

Putting these two things together leaves room for a very sceptical conclusion: the people will get the politicians they deserve and thereby the rulers they deserve.

Example: if we look here, here, here and here, we see that since the Labour Party took the reins of Government, they have instituted over 4000 new laws which criminalise certain behaviours.

What does this tell us about ourselves?

On the one hand, people will say everybody is allowed to have opinions on anything they want and all opinions are right or true...for you. You can’t argue with anyone’s opinion can you? What’s the point? Well, perhaps to try to change the opinion? To persuade someone to think like you do? Now there could be various reasons why you’d want to do this.

On the other hand, you can argue about what people know, can’t you? How so? The common denominator is belief – the ideas in our heads that shape our thoughts and feelings about everything and, ultimately, have an impact on our actions. Some of these beliefs are acquired actively by sifting through evidence and by rational decision-making, others might be acquired passively through our parents, our culture or the media and remain with us without having the support of any evidence, though quite why that should be the case is often difficult to comprehend.

The key points to make are:
So let’s just list our assumptions: