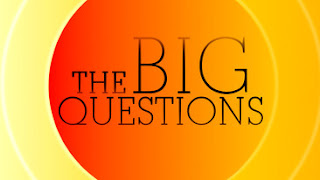 We appeared on 'The Big Questions' this morning at King Edward VI School, Handworth, Birmingham, which you can catch on the BBC i-player if you click the picture above - it should be available for a week, until the next program.

The three questions debated were:

1. Should Britain be ashamed of its arms trade?

2. Should adoption be colour blind?

3. Have we been here before?

We didn't get asked to contribute this time, but if we had, our statement would have branched all three debates.

First of all, the Hindus believe that reincarntion is the process by which the soul evolves into a higher plane of consciousness to become at one with the divine forces of creation, destruction and preservation.  But we cannot do this passively; we have to act.  Hence the philosophy of karma or action as manifest most eloquently in the epic poem The Bhagavad Gita which is part of the greater epic the Mahabharata which itself tells the story of the rise and fall of two dynasties which end up in a great war to settle once and for all the fate of humanity.

The Gita articulates the philosophy of action through the story of the warrior Arjuna who turns to face the opposing armies and has a sudden sense of self-doubt because he realises that these armies are full of people he knows: family and friends and colleagues.  He turns to Krishna (Arjuna does not know that Krishna is the Lord in human form) and puts down his bow in a state of despondence.  "How can I kill these people?" he asks.

Krishna then explains, very poetically, that whatever Arjuna thinks or feels at this time is irrelevant; he has to know that he was put on this earth to act and everyone's actions flow from their particular nature.  Arjuna's nature is to be a fighter; the greatest bowman on this earth.  Therefore, he must fulfil his nature and do what he does best - he must be the best that he can be in action - whch means to take up his bow and fight.

So here we have the essence of reincarnation:
Very compelling argument, isn't it?  But it raises those perennial questions: how do you know what you're made for?  What is your specific role on this planet?

Well, like every religion, and in the absence of any real physical evidence, the answer is that we have to take our guidance from some higher moral authority who knows what God had in mind for us - either an incarnation of God's words (like the holy scriptures), or of God himelf (like Krishna), or some enlightened human being (a guru or Pope figure, perhaps).  Some of you sceptics might not like this very much, but there it is.

Now, returning to the other two debate questions about arms and adoption: clearly Krishna wouldn't have minded the British selling arms to Arjuna, as long as this helped him to fulfil his action.  Neither would he mind the colour/gender/race/religion of an adoptive child's parents, as long as they helped the child to fulfil what it was made for on this earth.
Posted by TOK Team at 1:15 PM 1 comment: